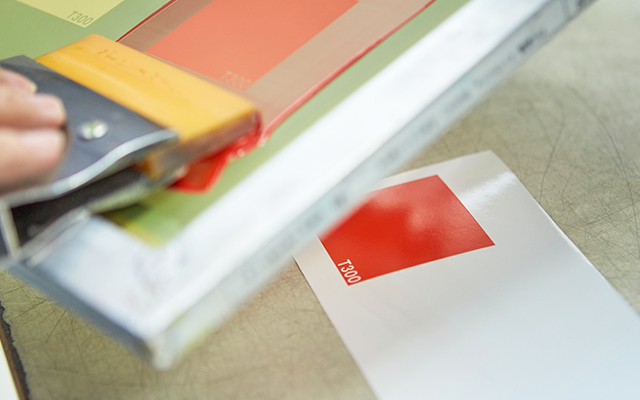 The followings show how the products work, how to use and how to solve the problems. These are the result of our achievement and know-how gained by our endeavour.

Printing ink is defined to defined to be a material that reproduces images on a substrate by employing the printing method. Furthermore, inks that are specially added with physical functions, including optical and electrical functions, chemical functions such chemical-proof and biochemical functions, and surface decoration function are called "functional inks" (see the table 1). UV ink itself may be said to be one of functional inks as it is immediately cured under ultraviolet ray. However, in this report, application examples of UV silk screen ink that makes importance of functionality will be introduced.

In relation to printing of membrane switch circuits on polyester films, this type of ink is used for the purpose of insulation coating that avoids any migration of silver paste ink, short circuit, and contamination. Also, there is insulation spacer ink with an insulation property. It is printed in thick film, functioning as a spacer.

Unlike other water-soluble type or solvent type, the UV curing adhesive (pressure sensitive adhesive) is made of 100% non-volatile type components. The film after curing is of an IPN structure where tackifier penetrates into three-dimensional reticulate bridges, enabling to achieve an excellent condensation property.
The advantages of this adhesive are as follows:

Typically,80 to 150 meshes/inch stainless steel screen or 60 to 150 meshes/inch polyester screen is used for printing of UV adhesives. In case a metal halide lamp is used, the exposure condition requires 300 to 350 mJ/cm² of accumulated light volume. This adhesive is applied to printing of adhesives such as membrane switch circuits, lamination of indicator sheets, and transfer seals.

As one of UV curing adhesives, inks that have low tackiness have been developed. Films printed with such a low tackiness ink can be repeatedly used by sticking and peeling, and no adhesive remains on the surface of a substrate. Moreover, if an adhesive strength is reduced to a degree that no tackiness is felt, it works as an anti-sliding material. Examples of applications as anti-sliding ink with UV curing low tackiness are the reverse side of mouse pads for PC, temporary fixing of compact discs, and so forth.

Jelcon USL series is a type of UV ink that forms a film with an anti-sliding feature as described above. There are following of three types in this series of inks:

In printing, this in can be used as it is after sufficiently churned. It is recommended to print ink thicker, using a 100 to 150 meshes/inch screen. If the ink film is thin, a good anti-sliding effect cannot be expected. Its curing condition requires 800 mW/cm² of ultra violet ray strength with 250 to 500mJ/cm² of accumulated light.

There is a masking ink specially designed for the sand blast process, which is a similar application as resist inks. In this method, the area other than the sand-blasted image area is masked with masking ink as depicted below, then the masking film is peeled off in warm water or other methods after blasting. The masked area remains smooth, while the surface of the exposed area becomes rough after blast, forming the expected image. Masking inks for sand blast require to form a thick film with elasticity, and to be peeled off easily. In this term, all of them are elastic UV Elastomer type ink. This type of inks are used for sand blasting against glassware, stainless steel doors, etc.

This series of ink is a type of strippable masking ink that makes a peeling process much easier by remarkable reducing the adhesive property through enhancing inner stress of UV curing resin and adding special detaching agent. A very strong and tenacious film is formed, so that the film is not broken when an edge of a printed film is lifted and pulled for peeling. RIP series ink is used for partial masking of painting or coating, and applied as protection film to temporarily protect a surface of a material or printed surface.

In 1995, as part of the recycling -related laws, "The Law Concerning Promotion of Separated Collection and Recycling of Containers and Packaging" was enacted, and subsequently recycling of PET bottles for beverage became compulsory in 1997. Accordingly, collection and recycling of PET beverage bottles was studied in the industry. Through such a study, it was found that removal of ink film that is directly printed on bottles was really necessary in order to implement recycling of PET bottles. As a result, UP curing type PEAS-AK ink that can be easily removed was developed. While this ink maintains the feature of UV curing PES-B ink that has an excellent adhesive property, the ink film is peeled off in a film swelling method after processed in diluted alkali solution during a recycling process.

In many cases, the plastic recycling process uses alkali solution for the purpose of degreasing, so the alkali solution process is considered as a means of peeling off ink film of screen printing. To begin with, the goal of ink design was determined as follows:

As for (2), a better result than expected could be achieved thanks to introduction of the special monomer. In particular, four layers of overprinted ink film (approx. 50microns thick) could be separated as short as in two minutes. Due to such a short time removal, it produces an effect to deter hydrolysis of ink film resin by alkali solution so well.

Concerning (3) and (4), the adhesive property was improved by printing on the PET bottles that had been pretreated through the flame processing. Furthermore, by adding the adhesion enhancer JAR-18 developed by Jujo Chemical into the ink at the printing stage, stronger adhesion could be achieved. Besides processed PET bottles, the materials that can be applied this ink are processed polypropylene and polyethylene (for forming) as well as processed polypropylene film.

The above values are the figures found as a result of tests, and are not guaranteed values.

Because Raycure PES-AK series ink hardly reacts against alkali, it has advantages such that alkali solution is not consumed, that the degree of contamination is very minor, and that the processing solution can be repeatedly used by periodically screening detached ink films with a filter. Thus, it reduces environmental load of recycling process as well as processing costs.

UV ink is often used for printing of labels for music compact discs. Since the other types of CDs such as CD-R (i.e. CD that can be recorded only once) and CD-RW (CD that can be recorded and erased repeatedly) are used as information recording media, their labels have to be a type that can be printed with a jet ink printer or hand-written with a pen by a user later: A new type of functional UV ink for such an application has been developed by Jujo Chemical (RCD ink). RCD clear is a type of UV ink in which hydrophilic fine powder and dyeabsorption agent are mixed, using hydrophilic oligomer as the binder: When this ink is coated over the surface of CD-R by screen printing and cured under ultra violet ray, users can print in aqueous ink with an ink jet printer or write with either a water-based or oil-based pen. In this way, ink spreads little and dries quickly. It is recommended to use CDV-SGX series 01 White or 07 High Density White as the background white. As an option, hard clear coating ink is also available to protect a print on a CD-R surface.

On the other hand, UV ink for the purpose of printing on DVDs has been developed by Jujo Chemical(product name:VID Ink), which is attracting attention in the industry. In addition to the fact that DVDs are made by laminating two pieces of CDs of 0.6 mm thickness which was a half of traditional CDs, the minimum length of pits is also reduced to a half to 0.4 microns, resulting the data storage capacity increased seven folds to 4.7 GB. In this term, a severer tolerance of distortion than that of CDs is required for DVDs. Generally, UV curing resin tends to shrink more or less during curing process. Therefore, when a DVD is printed with traditional UV ink, shrinkage by curing is too remarkable to stay within the standard. We could successfully maintain a low level of shrinkage of DVDs by combining UV curing oligomer and monomer that achieve a low shrinkage in the curing process. In addition, further lower shrinkage was achieved by mixing special filler. Because the coated film has a very low level of shrinkage, DVDs can be printed safely without sacrificing their performance. This type of ink can be used for traditional CDs as the coated surface is strong enough and it shows good adhesion. This means that a printing factory that prints both CDs and DVDs procures only VID Ink.

Recently, necessity for Braille printing such as signs, displays, brochures, etc. for visually handicapped people has been advocated, accordingly its demand has been increasing.

For Braille printing, special sensitized plates including metal masks, tick direct/indirect films are used. Braille needs 0.3 mm to 0.5 mm High dots, abrasion proof strength, comfortable texture, and clearness. Also, as for rheological property, it requires degassing property so that no air is involved in the ink, besides High viscosity to prevent ink spread and proper thixotropy are needed.

FUNCOAT BCP is a type of surface decoration UV ink that enables innovative expressions in High quality and economical cost. During printing process, the ink is foamed and causes cracks, instantaneously forming a three-dimensional, beautiful coral type pattern. When this ink is used for printing on gold or gold or silver foil in particular, it produces a very good effects.
FUNCOAT BCP-1 : Hard type. Foaming stability is good, and ink film is strong.

Regular solid printing with FUNCOAT BCP produces a pattern of corals immediately after printing, then cracked spaces spread gradually. In order to achieve a consistent finishing, it is necessary to expose the printed surface under ultra violet ray within 30 seconds after printing. Although there is no particular limitation about printing screen, size of coral patterns differs depending on screen mesh. In other words, a lower density mesh makes the pattern larger, and a Higher density mesh creates smaller pattern. Unless a screen and squeegee used for different type of ink are washed enough, the ink may not form a pattern. The standard curing condition is 800 mW/cm² of ultra violet ray strength and 150 mJ/cm² of accumulated light volume. 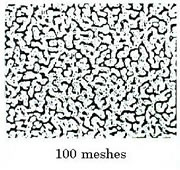 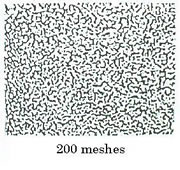 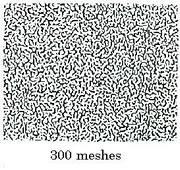 The silk screen process has two major advantages as described above; it can be used on quite variety of materials or shapes; and thick ink film can be printed. Although such advantages have been applied as features of the silk screen printing until now, it is considered that more new applications that aim various special surface finishing effects and functions will emerge in future, which will be achieved through enhancement of products and technology that will be developed due to new needs.